Today, I dug up my old, purple, 5th generation 16GB iPod nano — this Jurassic music artifact is still alive hurrah! — in one of my stuff-I-haven’t-used-in-years boxes. This was actually sold to me by my friend, Ahmad, at a very good deal. We met one rainy evening 3 (or 4?) years ago in a mall which, coincidentally, is just across where I’m living right now. Save from some minor scratches, I was delighted when I saw that the iPod was still in good condition and that it’s filled with lots and lots of good music. Ahmad is the vocalist of one of my favorite local bands, We Are Imaginary, so he’s got good taste. This pocket gadget helped me discover Vampire Weekend, Phoenix, and The Strokes, to name a few.

Yes, I tend to remember these small things. I wish I could do this for the more “important” adult stuff but I can’t. As I always say to my friends who are amazed at this accidental “talent”, “I tend to have a sharp memory for the unimportant stuff”.

Ok. Straying from my topic. Going back…

Cute how you tend to discover small ticks about yourself when you are not pressured by your everyday activities. Now that I’m on medical leave, I am more attentive to what I do outside of work. And one tick that I recently discovered is musical monotony. I listen to the same type of music day in and day out. Most of which are music from the 80s and the 90s. As such, I’m unable to discover new bands and genre on my own. It’s almost always a recommendation from a friend, a Facebook post, or an over hyped concert announcement (still on Facebook).

(1) wrinkle our noses at this techno-laden new generation music, tagging it as musical degradation

(2) blurt that a certain type of music is dead

When in fact, these are not entirely true. We just need to have an open mind and a true appreciation of music to brush off this greater-than-thou attitude. Made me think of a certain scene in La la Land where Keith told Sebastian, the overly passionate jazz purist,

“How are you going to be a revolutionary if you’re such a traditionalist? You’re holding onto the past , but jazz is about the future”.

So, throughout all these ramblings and what-nots, I would like to conclude this writing by saying that I should discover new music more. And not just limit my knowledge to what I already know by heart. I would also like to categorize how I listen to music daily just to keep me from my, as I’ve mentioned, musical monotony. This is what I have in mind: 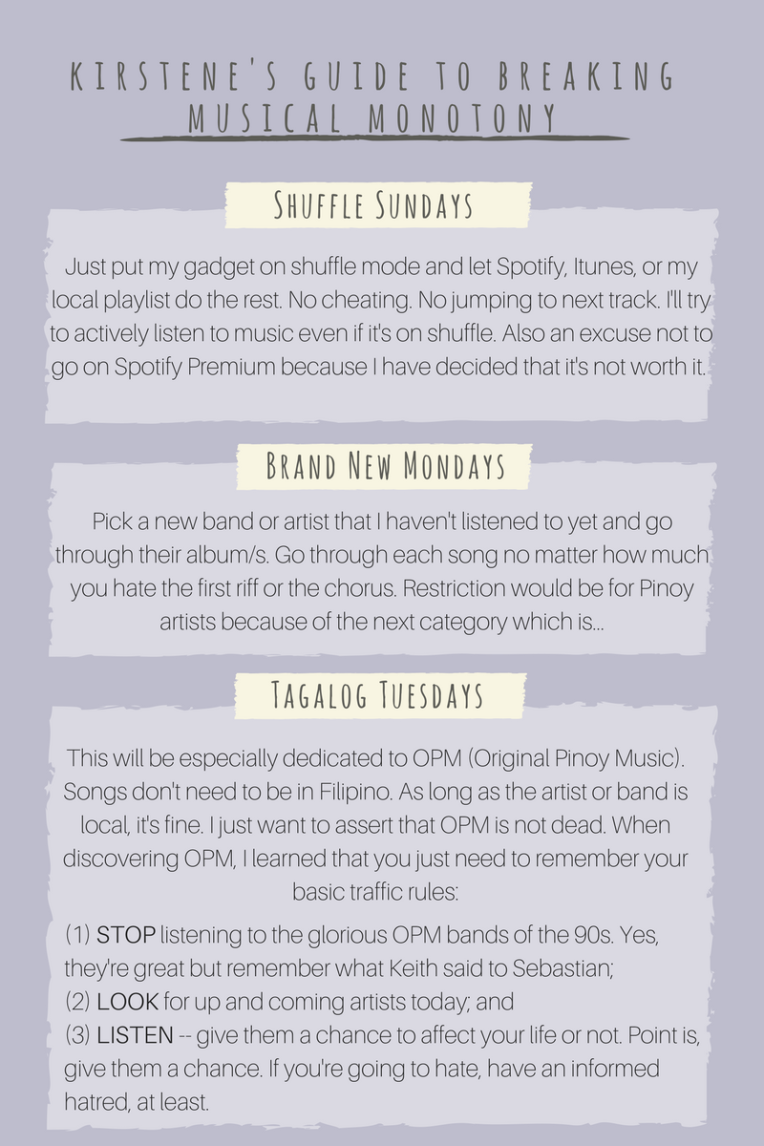 I will try to focus on only one artist or band per day, except if they only have one EP released and I’m already tired of listening to six songs by mid-day.

And since this was written in between the hours of Monday and Tuesday, I typed away with The xx’s  self-titled album for Brand New Mondays and We are Imaginary’s (formerly Your Imaginary Friends) One Dreamy Indeterminate Hum for Tagalog Tuesdays in the background.

Also, concluding my conclusion, I have decided to rename my Ipod from Lyla to Poor Paul as a reference to its color and Paul McCartney. Must love word plays, yes?