In my previous Singapore post, it was all about food. But aside from the gastronomic delights, Singapore is also remarkable for its fusion of traditional and modern architectural designs, shopping districts, and seamlessly clean streets.

Now, allow me to ramble about the different places that we visited in the city last January.

Christian’s cousin, Korinna, took us to this place on our first night in the city. This gallery bar sits on the 63rd floor of One Raffles Place and boasts of a 360-degree top-view of Singapore. A friend told me that this is a fine-dining place during the day but transforms itself into a party place for both locals and foreigners at night.

It was crowded when we got there; we practically have to maneuver our way to get around but the ambiance and view totally made up for it. The entrance fee will get you a free drink — in my case, a bottle of Hoegaarden. This was all Korinna’s treat, btw, so lucky us. 🙂

The elevator rides was also fun, if you don’t have major vertigo problems that is. It’s not everyday that you get to go up and down 63 flights and see the city lights flash by right?

The ever popular half-lion half-fish landmark of Singapore. Who wouldn’t want to have a picture taken here? I have to make some major cropping to all of our pictures here just to remove random stranger’s faces. Haha! There are just so many people lining up to get a snapshot! Based on my pre-SG trip research, there are several others located at random parts of the city, but this one in Merlion Park is the most popular.

This part of Singapore reminded me of the older part of Manila, but way cleaner. This is where we tried to buy those delightfully tacky tourist stuff — key chains, chopsticks, friendship bands, and so on.

I wanted to visit The Tintin Shop because someone told me that you can find it here. I just watched the Spielberg animated film a few weeks before so I was curious. Unfortunately, it was already closed. 😦

This is also the place where we had our toned down budget dinner. We have wasted away for the past 2 days so everyone’s determined to have enough pocket money for the rest of the trip. And so, each one of us bought a meal that we can share with the others from the surrounding kiosks. The result: A fun, pseudo-potluck dinner with friends (which involved a bit of hoarding over the Chili Crab).

OK, this was just a side trip on our way to Chinatown, but we spent some time here taking pictures, clinging on the wrought iron door knobs, and trying to take a peek inside the heavy wooden doors, wishing that someone would not stare back from the other side. Dumdumdumdum.

Not only was the temple majestic, the garden was also decorated by beautiful lights. To me they looked like stationary fireflies perched on trees. It was a refreshing change from all the mall hopping that we did the whole day. Too bad we weren’t able to go inside the temple itself.

This is the first time that I saw a double-decker bus in action, and actually rode one. I developed an annoying habit of internally singing The Smith’s There Is A Light That Never Goes Out song whenever I see one. Every. Freaking. Time.

The first time that we rode on it was when we went to Changi City Point for dinner and some malling. Instead of hopping onto the usual MRT, we decided to take the bus instead.

There’s not much of a difference, really, except that you will be on-level with the tall buildings instead of the pedestrians. I thought that I would have some byahilo issues, but there was none. It was a perfectly smooth ride. We rode another one on our third day as we were heading back to our hotel from Clarke Quay. We were the only passengers aboard so we trolled around and took some kulitan pictures.

This will be your best transpo friend during your whole stay. What’s good about the EZ-Link MRT is it is literally connected to every major point and it is the cheapest way to get around. Same as the MRTs here in the Philippines, you get aboard the trains via an electronic ticket. The difference is that they do not have single ride tickets. You need to purchase those stored value cards. It was a major convenience for us since we boarded the train a lot. What’s awesome about this, too, is you can use them for other modes of transportation such as bus and cabs. You can even use this in 711 stores! Another plus is the card balance will only expire after 5 years of your purchase.

It is nowhere near the MRT that we have here; they don’t have women and children-men compartments but theirs are so much cleaner and the passengers are very organized. There are hardly ever a long line. And you will be rest assured that no one will ever push you on your way in or out.

The stations was so unchaotic (very much unlike here) that we were able to take some levitation shots. Forgive me, but I’ve been dying to do this since Christian and I started our levitation project.

I’ve read about this place in magazines and seen it in the movie 500 Days of Summer. There alone, I already have this notion that IKEA is a dreamy and wonderful place. And it is. The furniture, the interior designs… the quirky household stuff that they sell, created and manufactured in a way that only IKEA can.

My favorite thing about this place is you can freely play around — you can lie on the bed, imaginary cook in the kitchen, and relax on the sofa as if they are yours. And picture-taking is very much allowed.  This is a treat for someone who comes from a place where department stores scream “No sitting” or “Do not touch!” on their upholstery.

This is the Singapore equivalent of Greenhills, except that it’s rowdier. There was a time when I thought that we were being ushered into a movie premiere, a concert, or the Cubao Station of  MRT-3. I even caught a temporary buzz in my ears from all the noise. This place is good if you’re looking for cheap finds, not if you hate body bumping and has a slight closed-space anxiety.

One redeeming quality is the Choc Spot where you can find big discounts for pasalubong chocolates and sweets.

This is where I bought one of my favorites, Ritter Sport Milk Chocolate with Yogurt Filling, which you can’t find anywhere here in the Philippines *sniff*. Another good find is the Ferrero Rond Noir. Jing bought a box and she was kind enough to give me a piece. It’s darker than the cliche Valentine Ferrero chocolates and tastes 50x better! Again, it’s not available in the country. If you’re going to SG anytime soon, please buy me a box of this darlings and ship it to me. I will love you forever! Haha!

For the shopaholics, this is your mecca! Rows of stores screaming designer labels….racks of clothes, shoes, bags, and accessories.. they’re all yours for the taking if you have cash. 😀

There are a lot of stuff that caught my eye — like that men statement shirt from Uniqlo that show lyrics from random songs of The Beatles, those cute purple flats from thelittlethingsheneeds, and that acid washed mini skirt from Billabong which was on sale (my friend Jing bought one). But the cheapskate in me won. I tend to immediately look at the price tag and subconsciously convert the prices to peso so I ended up throwing them back to their racks. If you’re out of the country and have cash to spare, do not, and I repeat, do not do this!

To be fair to myself, I bought some sensible pieces. One is a red, hooded coat from Aeropostale which cost around 40 SGD. I was overanalyzing on whether to buy it or not but when everyone said that it looks cute on me, I gave in. It’s not bad at all considering that it was on sale (50% 0ff), and the style and quality is very good. I’m so bringing this to South Korea on November. 😀

Another good find is the purple Uniqlo thermal jacket which I got for only 20 SGD. Here’s the best picture that I have of it so far. It is reversible, btw, and the reversed side is so soft and feels like a cat’s fur. Fuzzzzzzy! My friend, Jing, also bought one in a different color. I’ll try to get a picture of us wearing the same jacket together next time. 😀

It was a seemingly endless day of walking, trudging in and out of various shops, and waiting for Jing and Pat to finish fitting the handful of clothes that they bought (yes, there are clearly the winners of the “Singapore Shopping Challenge”. Haha!). There are times when my feet and legs would be so tired, I’d just slump on the next available floor or corner that I see. Nonetheless, I enjoyed every minute of window shopping with my friends. 🙂 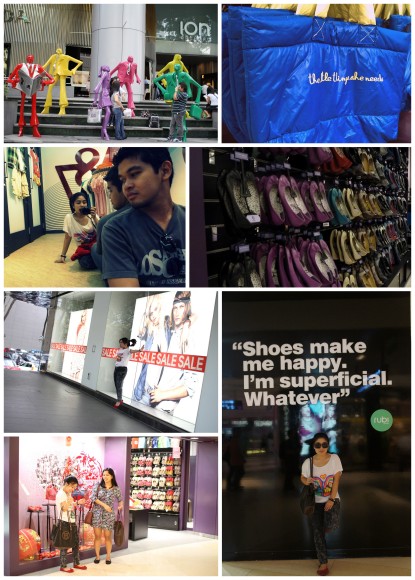 This is a commercial district by the riverside which, for me, vaguely resembles the Eastwood City Walk. This is most popular for gimmick nights, where you could enjoy blasting music, a good drink, and the fountain display at the center.

We were planning to meet some old office mates here for booze but they cancelled at the last minute. We just took a quick stroll around the area, took some pictures, talked by the riverside, and contemplated whether all waitresses in Hooters are hot.

Allow me to say that this is one of the reasons why I should go back to Singapore. We haven’t had the chance to try this! T_T

Christian’s friend, Tipoe, actually offered to treat us to this ride on our first night but we were a bit reluctant because one, it was expensive; and two, we just had a bellyful of soup and dumplings for dinner (thanks Din Tai Fung!). I had a clear idea on how scary and exciting this thing was based on the echoing screams of the people inside it. Yes, you can clearly hear them even from a distance. Reverse Bungee, I will conquer you next time!

That sums up my 3 days in Singapore. I would love to include our Universal Studio’s day but that place is so awesome, it deserves a separate post. Wait for it. 😉

Yes, it was tiring with all the brisk walking that we did but it was so much fun. This travel vacation was definitely a pumping year-starter for me. I would try to visit other parts of Sentosa for the beach and maybe even stay for a night in Marina Bay Sands Hotel next time. Hey, a girl can dream, right?

***I would like to thank my travel buddies Christian, Jing, Janine, Mils, Pat, Roan, and Rap to whom I grabbed some of the photos posted here.